In November of 2015 myself, N2IEN, W2RE and KB2HZI decided to give S9 a try for our next radio excursion. This trip we decided to try something new and threw 2m EME into the equation. With only a few weeks before the trip I had to go into overtime to attempt to pull it off. I ended up calling Bill AA7XT from Force12 and we discussed my plans. Bill being an active EME’er he was more than helpful giving me a “brain dump” of EME tips and tricks and what to expect. I ended up ordering a pair of Innov 9 element yagi’s which are shown above eagerly waiting for moonrise over the Gulf of Guinea. By the time the antennas arrived in the states we were only a few days out from departure. This was truly going to be a “flying by the seat of the pants” type of experiment. I would have loved to be able to setup and test the process before traveling to Africa and “preying” everything works first time out of the gate. We had a Kenwood TS-2000 and we were lucky enough that Lunar Link generously offered to loan us a 1.5KW amplifier for the trip. It was really awesome to have the amp with us but wow was that PS heavy!

The day before departure, setup and testing: Using one of the military fiberglass tripod kits, we mounted the 2X Arrays WRTC tribander. This worked very well on the ocean 🙂 You can also see the AZ/EL EME/Satellite tripod setup and tested. With a very nice flight stopping in the EA8 for a refuel we ended up in S9 about 12 hours after departing from NY. Upon arrival we wasted no time unloading the plane and starting the move through customs. As we are walking through getting all the gear from the luggage area I see a sign being held up “WW2DX” by a young gentleman, I walk over and it was a courier delivering my S9TM license! This event turned out to be a god sent  very shortly. From the luggage area the next hallway is the customs line. Here awaits a gentleman with rubber gloves and a razor blade. His job is to open up all your gear and “inspect it”. This guy was great but his manager was not at all happy with all the pelican cases full of gear. Quickly there was a very animated discussion in Porteguese and it was clear that something was not right. Luckily one of the females in our party could understand spanish and was able to translate enough information as we were trying to explain that the gear was going back home with us and not staying in the country. This point was not getting through very well and then I remembered in my back pocket was my S9TM license. I pulled the paper out of my pocket, unfolded it and handed this to the supervisor. Instantly the situation changed! Although a few more phone calls were made things seem to be understood with the exception that they wanted a itemized list of the equipment and I had to provide this list before we departed the country.

Getting the S9 License:

I need to back up a little and discuss the process I went through to obtain this piece of paper as I have received many inquiries from fellow hams asking the questions; How did I obtain the license, where did we stay and any “pointers” to know before going there. Let me cover these in detail in hopes that this helps future expeditions.

Through a local business which I will cover in great detail later, I found the right person to send the request to. If you are serious about going to S9 please email me directly and I will provide the email address of the president of AGER.

Reply from the inquiry:

I sent the money as required but weeks later I asked if the transfer made it and the answer was “no”.
During this timeframe I was in constant contact with a local business owner Vladimyr Vera Cruz of Sao Ferias travel accommodations. I would like to express how amazing Vladimir handled ALL of our unknowns along the way. Going above and beyond is a gross understatement of the level of attention to detail Vladimyr provided to us before, during and after our stay.
Since we were now close to departure and the binary bit packets of money were not making it to ST I reached out to Vladymyr asking for suggestions. The email I received was “taken care of”! Vladimyr drove to the AGER office and took care of the paperwork and fees. Outstanding! Remember the young man holding the WW2DX sign at the airport? Yeah, Vlad made sure that I had the proper paperwork when I arrived. In addition to handling the licensing issues, Vlad took care of our car rentals and even made sure an extra van was waiting for us as we had a lot of gear to transport to the house. I will go into other situations Vlad took care of for us later.

The location was great for NA/EU. The equator is at the south end of the island. We used the adjacent properties for antennas. Here W2RE is getting ready to deploy the tripod and WRTC yagi while dodging meadow muffins. The Palm we used for the OCF. The Palm to the left of the below picture is what we used for the 160m L feed point. The EME array, you can see the OCF to the top right. A crab “hanging out” while I was operating EME. Operating anywhere exotic never gets old, never. You get extra points when you are near or on the equator. Propagation is just non-stop around the clock and there is no end of running adrenalin. The pileups are huge and they are bottomless pits of callers. This reminds me of the biggest JA pileup I ever experienced from FJ.

We had three stations setup at S9TM. The first was the main HF station that covered 6m-160m.

^ This antenna never ceases to amaze me.

The EME experience to be honest was a tough one. Tough in the sense that this was really a last minute idea and I had no idea what to expect. The stress this added to my life was not pleasant. After getting the station all setup I started testing. The original radio was a TS-2000 which was hooked up first. Frank DL8YHR and I had a Skype call and he started throwing RF at me over the moon. Frank has a nice 4x9XP Array and QRO. 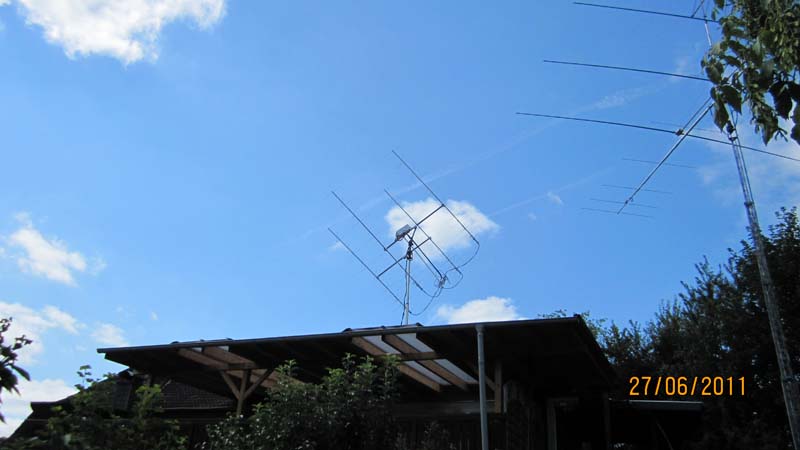 After a number of transmissions I did not see a single trace, nothing, nada. I checked and rechecked every connection, I swept the antennas with the analyzer and the SWR was perfect. We had a IC-7000 as a spare radio for the HF station and remembered it has 2m. I grabbed it and as soon as I started plugging in the antenna to the 7000 I could instantly hear the tones from Frank’s station in the speaker! Clearly the 2000 has a receiver issue! The second attack from murphy was with the Lunar Link Amplifier. The power situation on S9 is very unpredictable and unstable. We lost power many times throughout the day and when we had power it was not great. The moment I attempted to enable the HV to the 2m amp things did not go as planned. Sparks were a flying! The amp did not like the unstable power so at this point I was not going to take anymore chances with the amp as it was a loaner and I had no idea what damage it already had. Remember that stress comment?

Well now that I was receiving off the moon this was a good start! Not having QRO is going to be a big issue, 100w on 2m EME with a pair of yagi’s is going to be challenge. Did I mention that to this point was already a challenge?

I could hear and decode Frank but he was not hearing me. I called it quits for the first moon pass and figured tomorrow is a new day.

The next morning I went thought everything, connectors, coax, control lines, everything. At the next moonrise magic happened…. There you have it, history being made, the very fist 2m contact ever made from S9!

I just wanted to thank you for our EME contact.  You were my # 240 DXCC country on two meters.  I have been doing this since 1981.  This also was a very nice birthday present for me.  I just turned 73 years old November 25.  I will send my QSL card to your manager NR6M if that is OK.  I like to have all DXCC cards for the countries I have worked.  I also have LOTW that I already posted the QSL there.  Thank you very much and have a great Merry Christmas this year.  KB8RQ,Gary

This is why I love our hobby so much! How awesome is that! All of a sudden all that hard work paid off. What followed was an additional 10 contacts made over the next 3 nights on 2m EME all on 100w! Although that QSO rate is the slowest ever in my life, there was something special about it.

I went on to work the following stations. 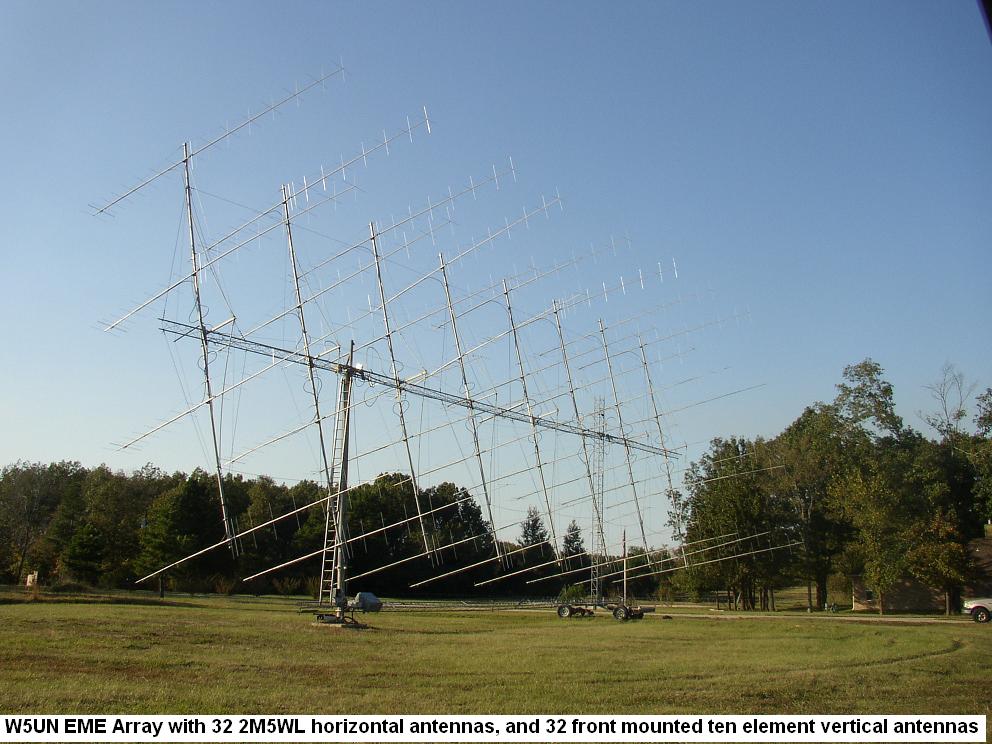 Clearly I was doing all the work 😉

At the end of the day I am very happy and I call this a success for the first 2m activation I have ever done on a expedition. Can things be improved, absolutely and they will be on the next trip to J8 in March.

The crew ended up making a few thousand qso’s for a holiday style operation. We learned a lot from this trip which was we over did it on gear. We won’t take the WRTC yagi next time, most likely swap that out for a hex or spider type wire yagi. The EME station will be improved.

Before we could leave the country, remember that itemized list customs wanted for the gear? Well, I had created this list and emailed the list to Vlad who again, took care of it. We packed all the gear, rounded up all the bodies and headed back to the airport. Upon arrival we were not allowed into the airport until we had the proper paperwork! Luckily Vlad’s wife Carla was running around the countryside getting paperwork stamped and “fees” paid. We had to pay a duty tax on the gear for the amount of time it was in the country even though we were taking it back. ( yeah no idea ). Carla showed up with the proper signed documents and we were then allowed to enter the airport (I’m not kidding, we were outside with all our stuff on the curb waiting). As we started to move all our gear towards the plane we were then told we needed to pay a “airport passenger tax”. I was then led across a field to the airpot tower where I proceeded to pay a “tax” for every person on the trip. I think for the 10 of us it was around $160 USD. We had a wonderful time in S9, I can’t say enough about how friendly the people were and helpful. I also would like to thank Vladimyr and his wife Carla for really going above and beyond for us and making it happen. If you are planning on a trip to S9 there is no option but to first reach out to Vlad and get the process started. One thought on “S9TM São Tomé and Príncipe”